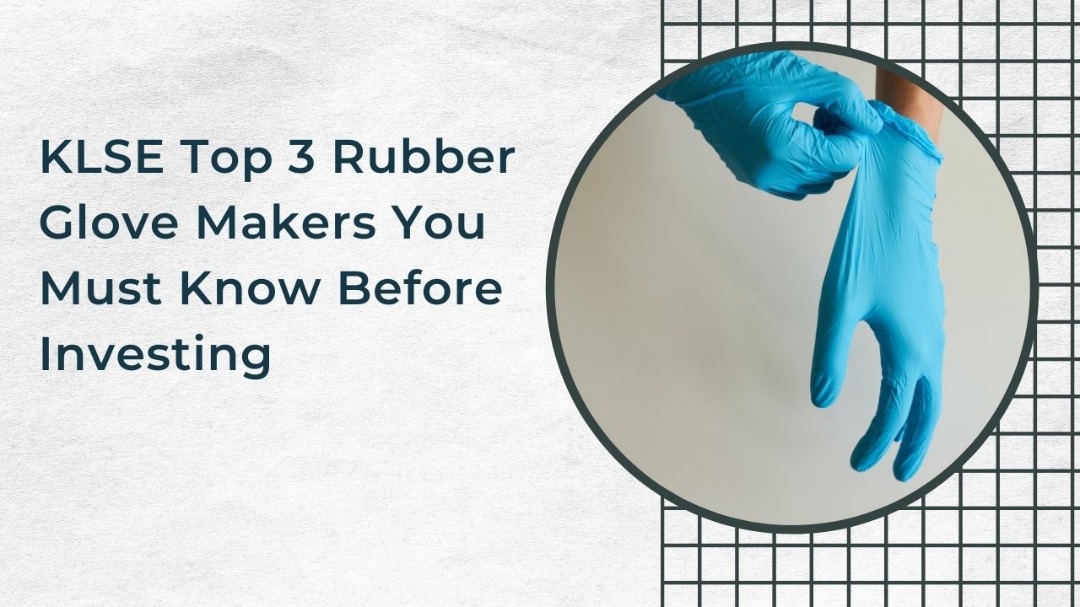 KLSE Top 3 Rubber Glove Makers You Must Know Before Investing & Should Investor/Traders buy on weakness or Sell because ASP Declining?

Background
When it comes to glove supply, Malaysia is the largest country that supply glove to worldwide. Malaysia’s rubber market share is expected to be around 67 % worldwide in 2021, according to the Malaysian Rubber Glove Manufacturers Association (MARGMA). Before the pandemic, global glove demand is expected to grow at a CAGR of 10% every year. However, due to the pandemic there is an increased awareness of self-health and hygiene in developing countries. This accelerated the global glove market demand and the gloves sold pieces is expected to grow at a faster rate of 15% CAGR every year. Despite the fact, rubber glove company stock price has been declining non stop so several months, so what happened actually?

Everything happens for a reason, and the market believes that the profits made during the pandemic are unsustainable, which is why the glove company is able to trade at this PE level. The boom in earning is believe to be one-time profit during the pandemic and the ASP of a glove will most likely return to normal after a few years. Thus, investor should value the company based on its future earning and not mislead by the low PE ratio that the company have now.

Besides, gloves company is also a company that has to operates with significantly high CAPEX and with negative free cash flow. Because of no cash flowing into the business, the company has to use loan to keep their business continue running. Thus, if we look on the glove company balance sheets most of them are in net debt position. 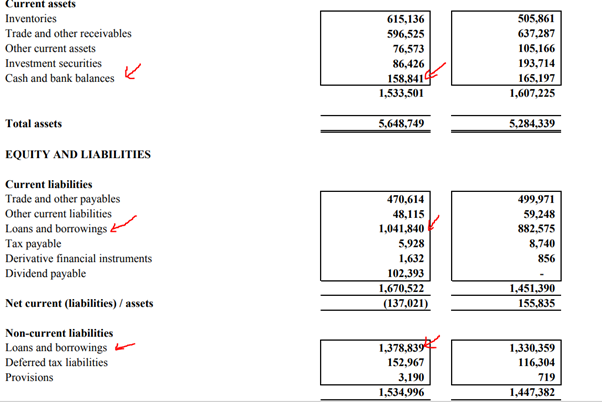 As vaccination started to role out, there is an improve of hospitalization rate in the hospitals all around the world and this pressure the ASP of the gloves as the demand of the gloves started to decrease from its peak. During the peak of the pandemic, a box of nitrile gloves costs between $110 and $120 USD. This is significantly higher than the price of gloves prior to the pandemic, when one box cost around $22 USD.

Aside from that, there is a lot of new competition coming in from new entrants, posing a threat to the ASP of the gloves. Because of these two factors, the glove’s ASP is unsustainable at over $100 USD and will eventually fall.

According to Hartalega’s most recent conference, the ASP of gloves has been declining since last year. The ASP of a box of gloves is $95 USD as of Hartalega’s most recent quarter, which ended on June 30, 2021. Analysts predict that the ASP will continue to fall by 20% to 30% in the coming quarter, with prices hovering around $65 to $75 USD. It’s possible that it’ll drop and stabilize around $45 to $50 for Hartalege in FY22Q1.

Many people are speculating that the new Delta Covid Variant, which is more contagious, will lead to an increase in demand for rubber gloves. However, despite the pandemic’s worsening, management has come out to say that there has been no increase in rubber glove orders. Due to the declining glove ASP, customers are becoming increasingly frustrated with high-priced inventories. Many customers are still waiting for the ASP of gloves to drop and stabilise before ordering again, as they do not want to pay a high price for gloves. The management of Hartalega believes that, by the end of the year, the demand for gloves will have rise back in terms of volume.

Despite MARGMA’s prediction of a 15% CAGR increase in glove demand worldwide, the total addressable market for gloves is expected to decline from its peak from $380 million USD to $224 million USD due to the decline in the ASP of gloves. It’s worth noting that Hartalega Management believes that the ASP of gloves will not return to pre-pandemic levels in the coming years. 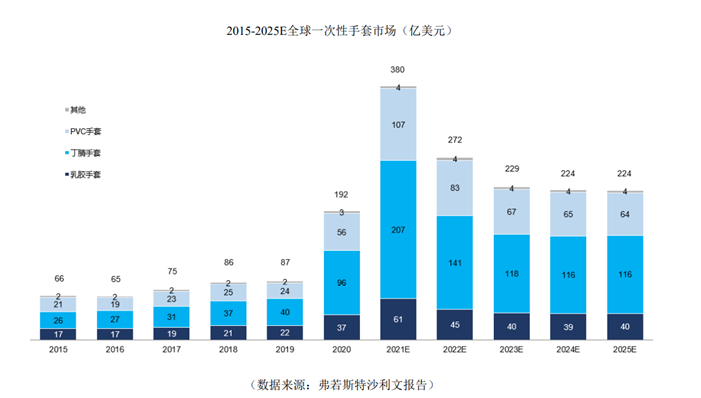 Intensify Competition
Malaysia has long been a major contributor to the glove industry. However, there has been an increase in competition from Chinese glove manufacturers. According to Hartalega, based on their announced capacity expansion plan, China is expected to contribute 23 % market share of world glove supply by 2022, up from an estimated 16 % . Malaysia’s current market share of 67 % is expected to drop to 60 percent by 2022.

If we look at the estimated glove production line, we can see that Chinese companies, particularly Intco Medical (英科), have been very aggressive in expanding their product lines. Their production line is expected to grow to produce 120 billion pieces gloves per year by 2022, implying a 76% capacity increase from 2021. In 2023, their production lines is expected to produce 173 Billion pieces of gloves per years and putting them on par with the top glove production. This raises the possibility of an oversupply situation in the glove market, putting downward pressure on the ASP of the gloves once more. 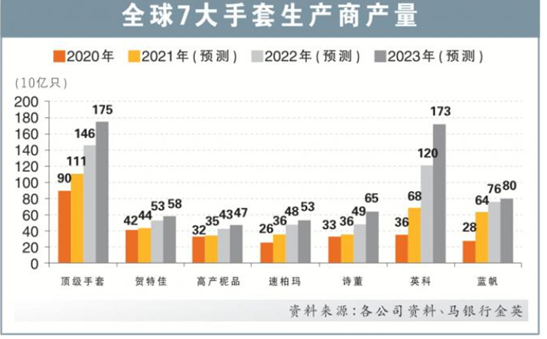 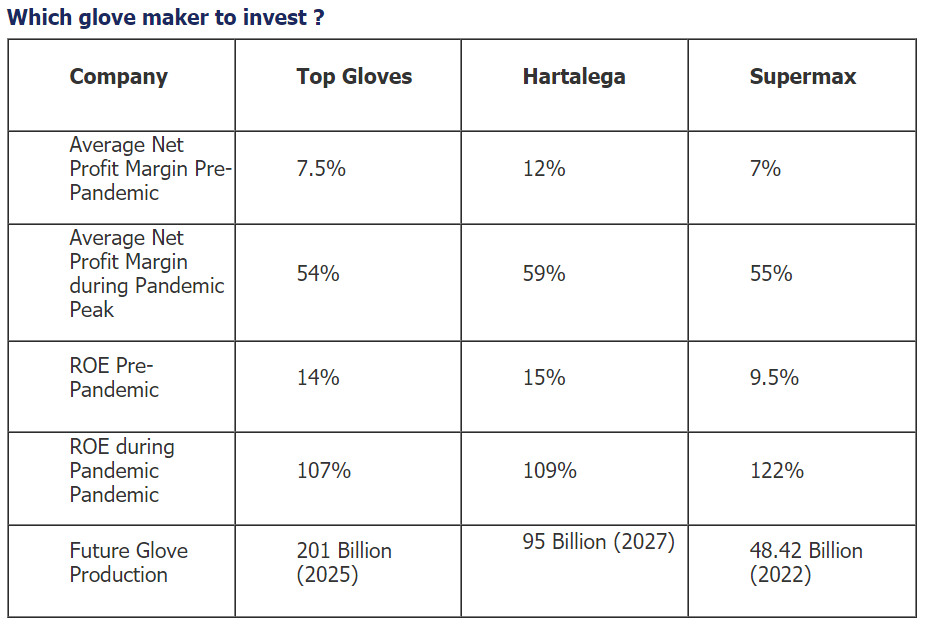 In terms of overall efficiency, cost control, and the ability of a company to return money to shareholders using its capitals, I believe Hartalega is the best option for investors, as evidenced by the fact that before the pandemic, Hartalega had the highest net profit margin and ROE. Even at the height of the pandemic, the company is also performing very well in terms of financial numbers.

Stay tuned to next article on the technical analysis reporting for Rubber Glove Makers.

This information only serves as reference information and does not constitute a buy or sell call. Conduct your own research and assessment before deciding to buy or sell any stock

Column Table AirAsia – Is this a time to look into AirAsia for Economy Reopening &...
Scroll to top