KLSE Top 3 Plantation Stocks You Must Know Before Investing & Why Investor/Traders must have these related stocks in their portfolio?

The plantation sector is off to a good start in 2020 as FCPO continues to extend its uptrend prices from 2019 to trade above RM3,100 per tonne on strong fundamentals.

We expected to last till the second quarter of 2020, supported by reducing FCPO inventories and declining stocks but more importantly the biodiesel usage B30/B20 respectively in Indonesia and Malaysia.

Malaysian’s Plantation sector is one of the biggest contributor to Malaysia’s GDP Growth. Responsible for providing 1/3 of employment to Malaysia worker, plantation stocks have seen volatility where back in Aug 2019 and now achieving almost 3 year high. Back in Aug 2019, TradeVSA make a forecast that at FCPO price @ RM 2,200, it was the lowest point before it began to rally to new high RM3,100. The reason for the bottoming of FCPO was a technical double bottom at support.

Let’s look into 3 good plantation stocks that has potentials. We look at the entire KLSE sectorial analysis to see why Plantation sector being the most dominant over other like technology and energy.

In our TradeVSA KLSE Sector screener, we can easily select top three counter doing fairly well from the technical aspects of Volume Spread Analysis (TradeVSA method). In addition, with our toolkit colour coded for ease of stock selection,(eg. Green with Purple cells is preferred), we have them “bubbled to the top” for quick investor/trader reference.

KLSE Sector Screener for Plantation shown currently lots of counters is in the uptrend and likely forming re-accumulation stage. In this article, we will focus Top 3 Plantation counters from the TradeVSA screener above.

Background
Listed in June 2006, Rimbunan Sawit is principally an investment holding company while its subsidiaries are involved in the cultivation of oil palm, processing of palm oil and other ancillary activities.

In September 2010, RSawit acquired equity interests (varying between 60% to 100%) in 9 plantation companies and the commercial rights of a plantation estate (Simunjan). Following these acquisitions, the group owned 91,500 ha of plantation landbank in Sarawak; out of which about 39,560 ha were planted, 38,000 ha were unplanted and to be developed later, and the balance 13,940 ha were unplantable and/or to be used for other purposes.

However, at the end of 2011, the group acquired oil palm planted land in Niah, Sarawak; and this was followed by the acquisition of another land in the Melinau Area in Sarawak in November 2012. This has thus lifted its plantation landbank to 92,312 ha.

Weekly TradeVSA chart show a strong breakout with high volume. The last shakeout happened in the accumulation before Smart Money pushes the price above resistance. Notice the green pentagon in Mid of November show a great interest by Smart Money to at support level. Currently price is pulling back after we spotted the Up-Thrust bar with high volume. Looks for the next Sign of Strength bar to look for potential entry.

A huge pullback happened after the mark-up stage since end of October. Notice price reverse with No Supply (NS) signal show Smart Money is flushing out weakhand holders. Pullback completed with NS signal and mark-up stage will continue.

Another red pentagon appeared in the Mark-Up stage which likely to form a pullback pattern. You can trade with the next green pentagon bar / signal similar on 16 December 2019.

A similar Up-Thrust bar appeared like Rimbunan Sawit and subsequently price trying to test with narrow spread bar to support. We will look for potential strength to ensure the pullback pattern is form before looking for entry.

Clearer signal can be spotted in the daily chart with the help of Pentagon signal. Price moving up from accumulation stage and increase with volume. Pullback have completed with another Green Pentagon bar.

TDM currently is in Mark-Up stage after the Green Pentagon signal appeared on mid of November 2019. The chart movement is similar with RSawit and JTiasa which we saw a period of accumulation before break out with high volume.

Clear signals can be easier spotted too in daily TradeVSA chart for TDM. Notice in the chart, we have 2 pullback areas for potential low risk entry in the Mark-up stage. Volume increases too with Line Change indicate Smart Money are interested to mark-up higher.

The current chart pattern is forming another pullback again after the Up-Thrust bar.

Summary
After considering all the fundamental and technical aspect, we preferred JayaTiasa over TDM & RSawit. From Fundamental standpoint, there are not much difference, still losing money from last financial year. 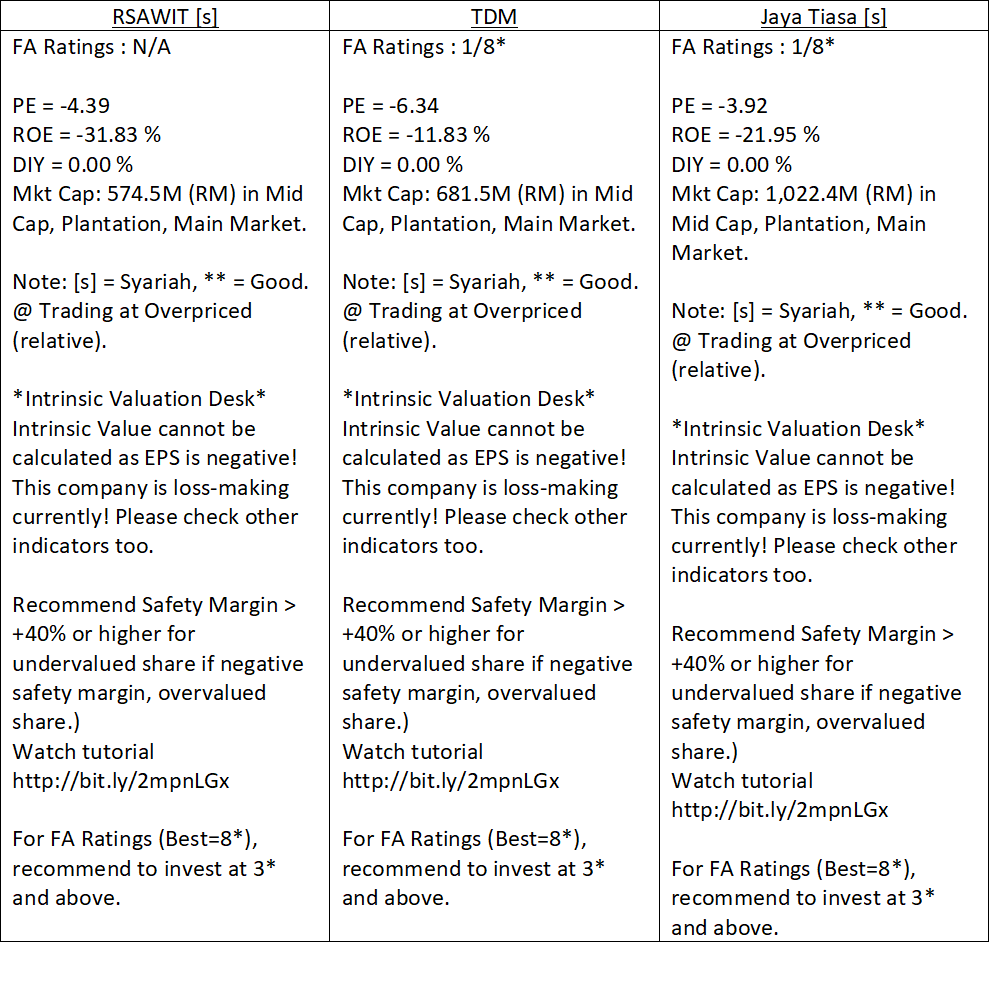 We will cover for technology sector next week. Let us know what sector you wish us to cover in the next article in the comment below.

Contact us via: email at support@tradevsa.com or Call/WhatsApp at +6010 266 9761 if you have any queries.
Join our FREE Education via Telegram Channel: https://t.me/tradevsatradingideas
Facebook: www.facebook.com/MartinTFWong
Youtube: https://www.youtube.com/channel/UCKiafbxoa-DtTF5YP0v-HYg

Buy high and sell higher in the Plantation Sector Which is the Best Stock to Watch for in the Property Sector Bursa 2020?
Scroll to top